Wine and Bike:
In Pursuit of the Vine 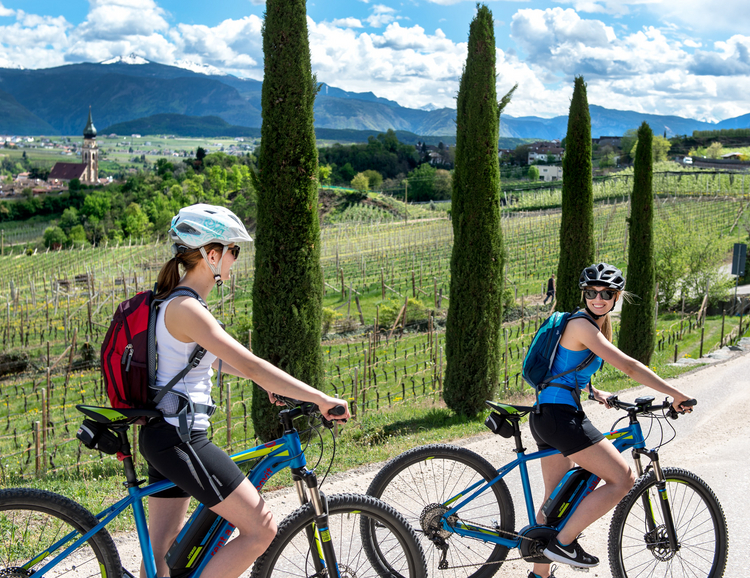 There is perhaps no experience quite so delightful as cycling along the Alto Adige Wine Road on a warm, sunny day. Italy’s oldest wine road reaps the benefits of the region’s dry, mild climate and more than 300 days of sunshine a year. Visitors will find a number of activities along the way—and some noteworthy culinary indulgences.

The serene and picturesque wine road comprises four different routes for cyclists. Each one follows a trail that winds through breathtaking landscapes with opportunities to stop and see castles or visit wine cellars along the way. Cyclists will have the opportunity to taste the region’s most important native grape varieties: Lagrein, Vernatsch, and the local variety Gewürztraminer. International whites and reds grown in the area are also on offer: Pinot Blanc, Sauvignon, Pinot Noir, Merlot, and Cabernet all have a long history of cultivation in Alto Adige.

The four cycling routes that make up the Alto Adige Wine Road meander along the Adige (Etsch) River and through the verdant orchards that thrive in the valley. The trails have no demanding grades: even beginning cyclists will enjoy winding through apple orchards and vineyards. You’ll pass old railroad lines, bike alongside lakes and ponds, and see medieval castles and stately mansions. Open wine cellars offer a welcome place to stop and take a break.

All three paths are open throughout the year. They can be cycled as a single trail or combined together for those seeking a longer route.

Each of the three main routes focuses on the winegrowing area in which at least one of Alto Adige’s ancient, indigenous grape varieties is grown. The region’s most important native varieties are Lagrein, Vernatsch and the local variety Gewürztraminer.
The northern wine trail leads through the area where the highly esteemed Lagrein was historically cultivated. A wine called St. Magdalener is also popular here: the light red wine is a blend of Lagrein and Vernatsch.
The central wine trail runs through the area around Caldaro (Kaltern) Lake. Here, you’ll find another native variety, called Vernatsch, thriving in the Oltradige (Überetsch) hills.
The southern wine trail leads through what has been Gewürztraminer country for centuries. Winegrowing here can be traced all the way back to Roman times. The Gewürztraminer variety of grape, which makes the white wine so loved throughout the world, is native to the area around the village of Termeno (Tramin).